SPRINGSTEEN & ME:
FROM NEBRASKA TO OHIO
—

NOTE // If you’d rather listen than read, this article also exists in audio/podcast format via Song & Story. It includes audio from the Heider family home video archives. Read here. Listen there. Your call.

It’s been over 6 years since I released a full album and almost 4 years since I officially released any new music at all. So if you haven’t heard through our various social media channels, I’ve finally released a new album. It’s called Ohio (watch the teaser here). And I want to tell you more about it in my own way. Because, as is the theme of my podcast, there’s a story behind these songs and why I wanted to record them. This story begins on December 22, 1985 and, yes, it involves Bruce Springsteen.

If you’ve listened to every episode of Song & Story, then you know that I mention Bruce, at some point, in pretty much every episode. I genuinely love his music. And I’m finally going to tell you why and how it relates to the album I’ve just released. As far as being a fan goes, I’m still technically a young one. I’m 35 and I haven’t even really been a Springsteen fan for a full decade yet. Though the roots run deep…

Our Heider family home videos begin on the evening of December 22, 1985. That’s when my dad got his first video camera — the kind that recorded straight to the original, full-size VHS tapes. The first 10 minutes of our very first home video tape is my mom, my sister Val, and myself hanging out in the living room while my dad figures out how the camera works and narrates a bit as he goes. And the 9-minute and 34-second mark [out of 30+ hours of video tape] is where the music of Bruce Springsteen can first be heard blasting in the background.

It’s Born in the U.S.A., or, as my dad narrates: “We’re listening to some of the hit rock music of the time period.”

Born in the U.S.A. was released in June of 1984, less than 2 months after I was born. And 18 months later, in December of 1985, it was still a hot record. Now, a popular album is lucky if it has 4 hit singles. Born in the U.S.A. had 7 top-10 hit songs. And in the first 90 minutes of the Heider Family home video archives, Born in the U.S.A. is a common soundtrack blasting in the background.

Despite these fond memories and home video evidence of my sister and I [literally] dancing in the dark to Dancing in the Dark, I didn’t really become a Springsteen fan until after I had recorded my own first studio album The Salzburg Revolution.

The week in between Christmas 2009 and New Years, I spent at Innovation Studios in Steubenville, Ohio recording an album. I had cut Christmas/holiday time with my family short so that I could record. And that was strange for me. I’m a family-man through and through, and Christmas is my favorite time of the year. And this lack of quality time with my family over the holidays had left me wanting.

Feeling nostalgic and having just spent a little time at home reviewing all the home video tapes that my dad spent hours digitizing, I bought my first Bruce Springsteen album: Born in the U.S.A. The purchase was 100% driven by nostalgia. I bought it for posterity’s sake. And then the music genuinely moved me.

I felt the pain of the Vietnam vet in the title track who lost his brother in the war and returned home unable to find work and rebuild his life. I felt the rush of youthful optimism in No Surrender. I heard my dad belting out his caricature of The Boss when blasting I’m Going Down. I listened to Glory Days and remembered the fun I had hanging out with friends in college, playing music in the bars and coffee shops on campus. And then there’s the last track on the album: My Hometown. Where the rest of the record feels anthemic, My Hometown feels intimate, small, and especially personal. Bruce sings in the first verse:

I was 8 years old running with a dime in my hand
To the bus stop to pick up a paper for my old man
I’d sit on his lap in that big old Buick
And steer as we drove through town
He’d tousle my hair and say “Son, take a good look around.
This is your hometown.”

Now, giving a kid a dime and sending him to the bus stop to pick up a newspaper wasn’t still “a thing” when I was 8 years old. And in 1992 it certainly was no longer kosher to let a kid sit on your lap and pretend to steer while you were actually driving. But it didn’t matter. Because the way Bruce writes and sings about his childhood made me remember my own. I hadn’t really lived at home in Dayton for about 7 years at this point. But this closing song made me think fondly of my hometown in Ohio.

I was living in the D.C. area of Virginia around this time, and on the eve of my 26th birthday — which I spent alone in my house, eating Arby’s roast beef sandwiches and watching VH1 Storytellers w/ Bruce Springsteen — I wrote the following words in a song of my own, a song written to my 8-year old self:

When people criticize you, ask if what they say is true
Don’t ever forget where it is that you came from
And, boy, take a good look at your father
Close your eyes and ready, set, become…

I bought my first Bruce Springsteen record in January of 2010. By the middle of 2011, I owned — that is, I had legally purchased — all 16 of Bruce’s albums and a bunch of bonus material (official releases of bootlegged shows, multiple concert DVDs + documentaries, etc.) There’s just something about his songs and his stories, about his combination of music and lyrics that gets me.

In my entire high school experience, there isn’t a single moment that even slightly resembles me sitting next to a pretty “barefoot girl on the hood of a Dodge drinking warm beer in the soft summer rain.” I didn’t drink in high school. And I drove a Chevy — it was an ’86 Celebrity station wagon that I never took out racing in the streets. But the way Bruce sings these songs, it makes me feel like I can remember the experiences he’s describing as if they were my own. And that is good songwriting.

As much as I’ve appreciated listening to and thinking about Bruce’s music over the years, I wanted to honor it in my own way. This is why my new album is Ohio. 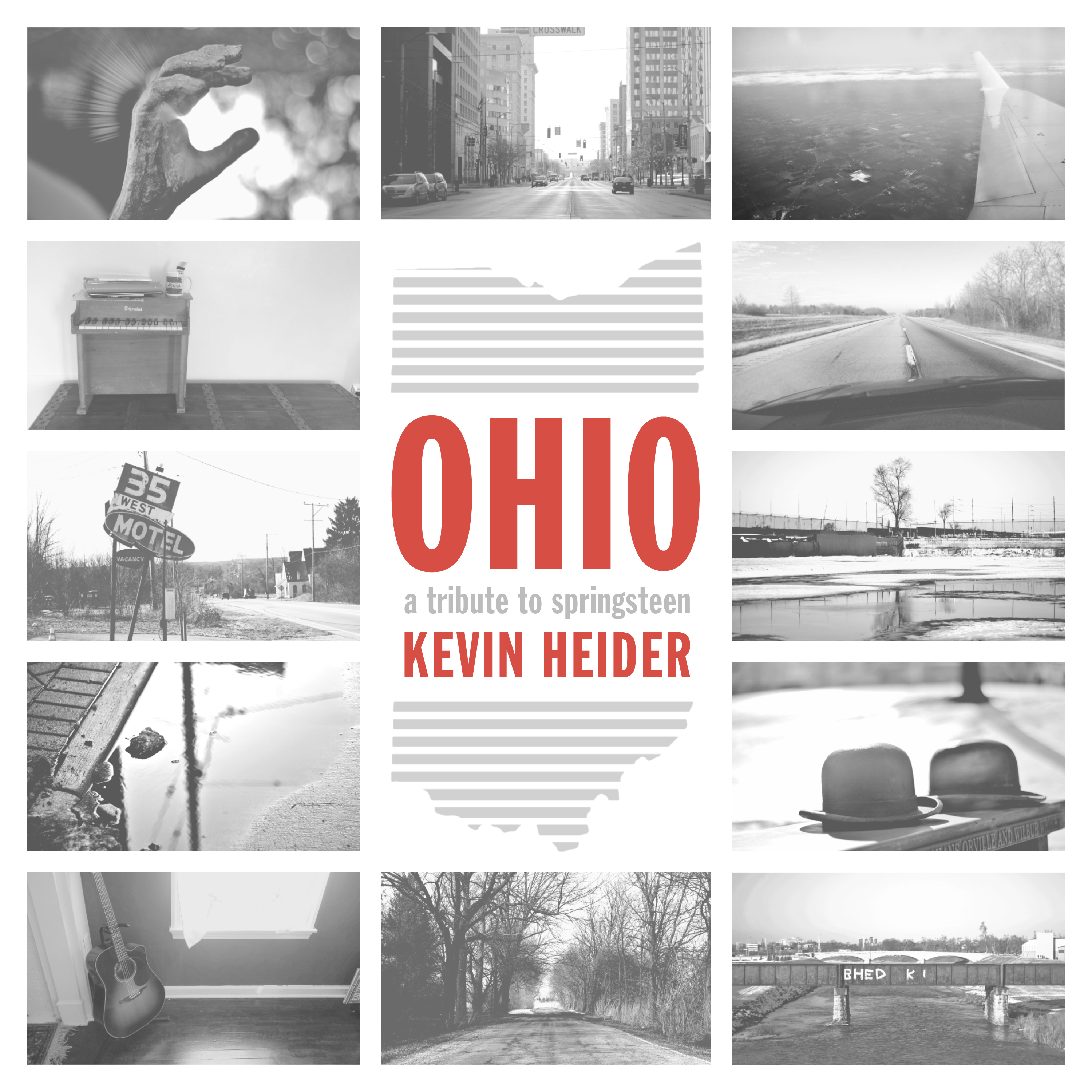 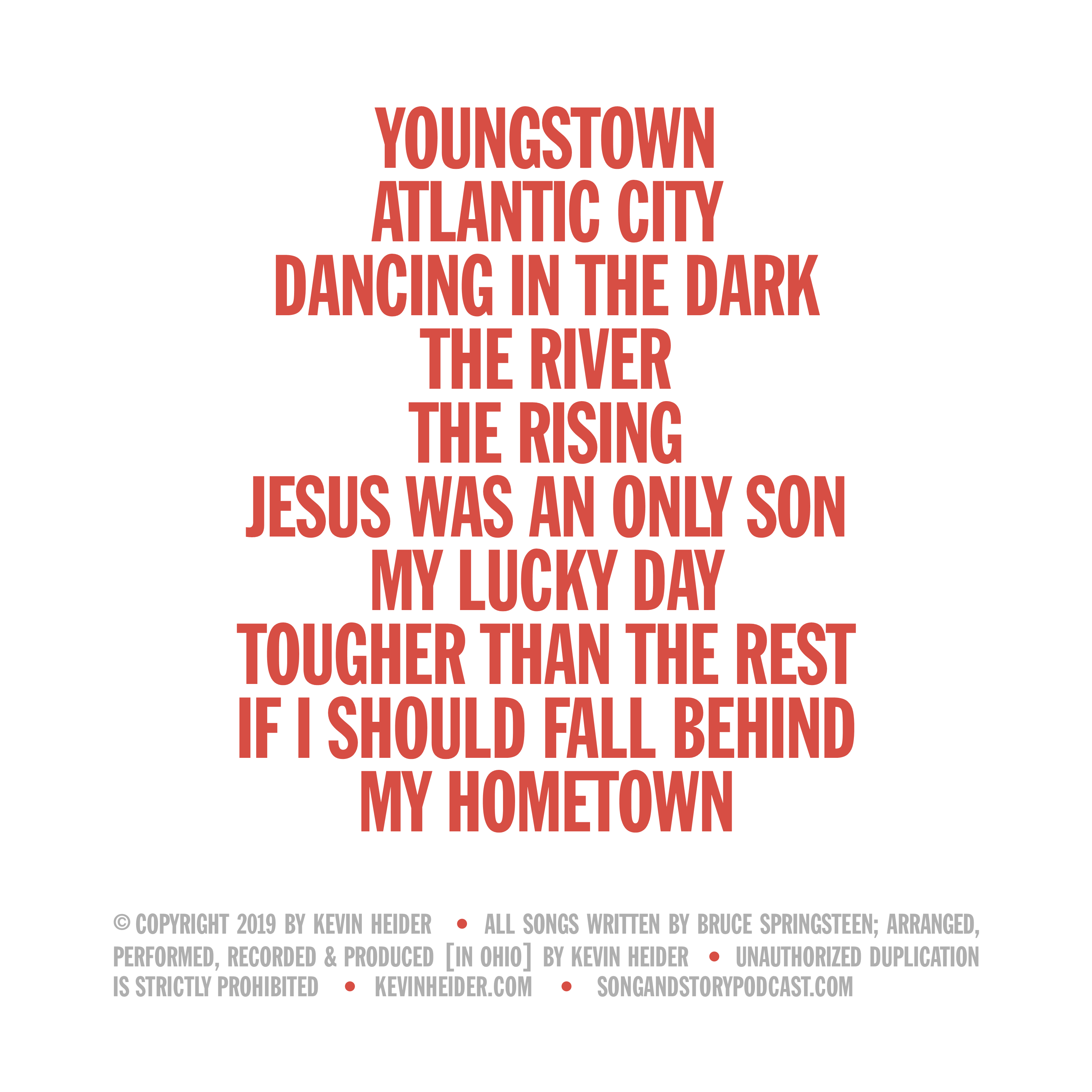 I’m calling it “Ohio” to keep it simple. But the full/official title is Ohio: A Tribute to Springsteen. As the title suggests, this is a covers album — my arrangements and re-imaginings of some of my favorite Springsteen songs. More specifically, these are totally new takes on 10 of Bruce’s songs (spanning 9 different albums), all recorded in the style of Nebraska. If you’re unfamiliar with Bruce’s Nebraska album, it’s iconic. For a whole bunch of reasons.

He recorded it in 1982, in his bedroom in New Jersey. The recordings were only ever intended to be acoustic demos for another full-band record with the E Street Band. But a few months later, this 10-song collection of bedroom demos was released. And this still-young rock-n-roll star — who in the last 5 years had begun selling out stadiums and arenas and had gained a reputation for regularly playing shows that lasted 3+ hours — had created a folk masterpiece.

Acoustic guitar. Harmonica. An occasional mandolin. A light organ on one or two tracks. And that’s it. The guitar is occasionally out of tune. His vocals peak in spots. The production is minimal. The reverb is loaded. There’s no band. It’s just Bruce playing his guitar alone in his bedroom. And isn’t that what every real fan really wants to hear? Their favorite musician playing alone in their bedroom? Trying out some new songs, songs that feel different from anything they’ve written before?

That was Nebraska. And it’s what I hope I’ve achieved with Ohio.

This is a passion project through and through. And it is entirely homemade. I produced and mixed all the songs myself. Bruce recorded Nebraska in his bedroom in New Jersey, and I recorded Ohio in my old bedroom at my parents’ house here in Dayton, Ohio. I didn’t have the primitive equipment of a 4-track tape recorder, but I kept the tech to a minimum: I recorded all of the songs using my podcast microphone and I mixed them using my home video editing software. I didn’t have anything fancy like ProTools. I didn’t do any pitch correction on my vocals. I didn’t record to a metronome. I played it straight and, in the spirit of Nebraska, I kept Ohio simple.

I hand-picked + arranged each song, and some of them sound very different than the originals. Some songs I picked because I admired the craftsmanship. And some songs I chose because they’re special to my wife and I — we love singing My Lucky Day with our kids, and the first song we danced to at our wedding was If I Should Fall Behind.

Even though I didn’t write any of these songs myself, they all feel just as personal to me as any of my own.

So if you’re a fellow Springsteen fan, I hope, as you listen to Ohio, that you feel I’ve done Bruce justice, that I’ve stayed true to the spirit of his songwriting. And for the rest of you — for you who may not be all too familiar with Bruce’s music, for you who roll your eyes every time I mention him on this podcast — give Ohio a chance. If you like the music you’ve heard from me over the years, you’ll like this too. This album is me. I just didn’t write the songs.

Ohio is available on iTunes, Apple Music, Spotify, Deezer, Google Play, YouTube, Pandora, and more. Buy it, stream it, share it. Tell your friends and family to listen to Ohio. And from the bottom of my heart, I hope you enjoy it. Thank you for listening.

P.S. For Halloween 2010, I went to a party dressed as the Born in the U.S.A. album cover. Only one guy at the party knew what I was without explanation (shout-out to Brian Kissinger). All my other friends just rolled their eyes as I explained why I had an American flag taped to a giant posterboard hanging backwards from my neck. While I can’t say that this costume had anything to do with it (it didn’t), I am now married to one of the women who hosted that party. So, literally anything is possible. I’ve mentioned her many times on this podcast. Her name is Kristin. She’s a nurse, she’s amazing, she’s kind, she’s good, she’s beautiful. If you’re a recent fan of my music, she’s my Permanent Valentine. If you’ve been a fan for a while, she’s also the Girl from Frederick. And if you’re a true fan (God bless you!) she is O Maria.