NOTRE DAME:
THEY COULD NOT
KEEP FROM SINGING
—

“Looking back” is something that humans are prone to do in the midst of loss. Every spiritual inclination and religious impulse, every scientific intuition and exploration requires looking back, demands that the truths revealed in the rituals, traditions, methods, and processes undertaken until now are given their due consideration.

I had missed my wife’s text: “Notre Dame is on fire!!” So when she called yesterday around 3:30 in the afternoon, her words, straightforward as they were, didn’t register. Notre Dame was on fire, burning as she broke the news to me. She had already cried. And for the next couple of hours, I held back tears of my own every time a new aerial photograph made its rounds on Twitter.

Everyone — believers and non-believers alike — who saw this great cathedral as a sanctuary of some sort, who regarded her art, architecture, and function as holy and wholly set apart, as a material construction whose beauty transcended the material, acknowledged the depth, the sorrow, and the historical significance of this loss. And yet, as the people gathered in the streets of Paris to [maybe] say goodbye, they could not keep from singing.

I visited Notre Dame once — on October 14, 2006. The Saturday evening vigil Mass was the last stop on what had been the most haphazard of excursions across Portugal, Spain, and France. Anyone who noticed me walk into the cathedral that evening would have observed the following: white male, early 20s, wholly unkempt (I hadn’t shaved in two months), wearing raggedy flip-flops and ripped blue jeans (I had ripped them earlier that week while walking on my knees on concrete per a unique tradition at a pilgrimage site in Portugal), carrying a full hiker’s pack on his back with a loaded satchel hanging from his neck (about 50 lbs. total), obviously American.

But Notre Dame did not judge me. She did not turn me away. Despite my outward appearance, she welcomed me with open arms and invited me to wonder.

For everyone in our small group [of six], this 10-day trek had been the first during our semester abroad for which we had made our own travel arrangements. Nothing had gone according to plan. We incurred a great many unexpected expenses, getting lost on more than one occasion (see my song Barcelona for more details). And on the 9th day, before we boarded an overnight train back to our semester’s home in Austria, we stopped in to see Notre Dame. With her iconic bell towers, her mesmerizing rose window, her spectacular symmetry, and her towering arches, she invited us to get lost once more — not in some dirty old Spanish town, but in beauty.

Notre Dame was different than other ornate churches and cathedrals I’d visited in Europe. Her ceilings were not awash in heavenly paint like those at the Gesù in Rome. She was not bathed in gold per the baroque style of St. Peter’s in Vienna. Nor did her gothic qualities have quite the same dramatic effect as the remarkable [and truly overwhelming] St. Stephen’s (also in Vienna). Rather, the experience I had walking into Notre Dame was more akin to what I would experience about 10 years later when I visited the great redwoods of Muir Woods, one section of which is actually called “Cathedral Grove.” On both occasions I had approached the doorway engaged in conversation and was promptly moved to silence upon entering.

The peace I felt from the moment I walked in seemed to erase the tension of the journey that had brought me there. The spirit of silence to which Notre Dame’s mystery had moved me ordered my participation in her liturgy. While I didn’t speak the native tongue, the language of the body is universal, and its movements in the Mass were familiar to me.

At the climax of the liturgy, carrying the weight of the week’s adventures [and the extra shoes of my five traveling companions] on my back, I solemnly approached a stranger, who offered me sustenance as he spoke to me in French. “Le corps du Christ,” he said. I responded in Hebrew, “Amen,” and graciously accepted the gift. And to think: the little piece of bread given to me by that stranger was, really, the sole reason for the cathedral’s construction.

Distracted from my work, my eyes were glued to the footage of the spire collapsing. The billows of smoke reminded me of the impermanence of all things, of the mantra of Ash Wednesday that guides Christian meditation through Lent: “Remember, man, that you are dust, and to dust you shall return.”

In lieu of this loss (as I write this, the extent of the damage is unknown), I look back on the two hours I spent inside Notre Dame with gratitude.

At my first glimpse of the images on the news, I thought about these words written by Swedish filmmaker Ingmar Bergman almost 70 years ago:

There is an old story of how the cathedral of Chartres was struck by lightning and burned to the ground. Then thousands of people came from all points of the compass, like a giant procession of ants, and together they began to rebuild the cathedral on its old site. They worked until the building was completed — master builders, artists, labourers, clowns, noblemen, priests, burghers. But they all remained anonymous, and no one knows to this day who built the cathedral of Chartres.

Regardless of my own beliefs and my own doubts, which are unimportant in this connection, it is my opinion that art lost its basic creative drive the moment it was separated from worship. It severed an umbilical cord and now lives its own sterile life, generating and degenerating itself. In former days the artist remained unknown and his work was to the glory of God. He lived and died without being more or less important than other artisans; ‘eternal values,’ ‘immortality’ and ‘masterpiece’ were terms not applicable in his case. The ability to create was a gift. In such a world flourished invulnerable assurance and natural humility. Today the individual has become the highest form and the greatest bane of artistic creation.

The smallest wound or pain of the ego is examined under a microscope as if it were of eternal importance. The artist considers his isolation, his subjectivity, his individualism almost holy. Thus we finally gather in one large pen, where we stand and bleat about our loneliness without listening to each other and without realizing that we are smothering each other to death. The individualists stare into each other’s eyes and yet deny the existence of each other.

We walk in circles, so limited by our own anxieties that we can no longer distinguish between true and false, bet
ween the gangster’s whim and the purest ideal. Thus if I am asked what I would like the general purpose of my films to be, I would reply that I want to be one of the artists in the cathedral on the great plain. I want to make a dragon’s head, an angel, a devil — or perhaps a saint — out of stone. It does not matter which; it is the sense of satisfaction that counts.

Regardless of whether I believe or not, whether I am a Christian or not, I would play my part in the collective building of the cathedral.

As one blessed by two whole hours in the sanctuary of Notre-Dame de Paris, as an artist, as a person of faith, and as one who sees and seeks value in beauty, mystery, and orienting the work of human hands toward something greater, I find so much hope in Bergman’s words. So here, now, with no offense intended to Bergman, I’d like to make his words my own and say: Regardless of whether I believe or not — whether in my thoughts, words, or actions I am a Christian or not — I want to play my part in the collective building of the cathedral. 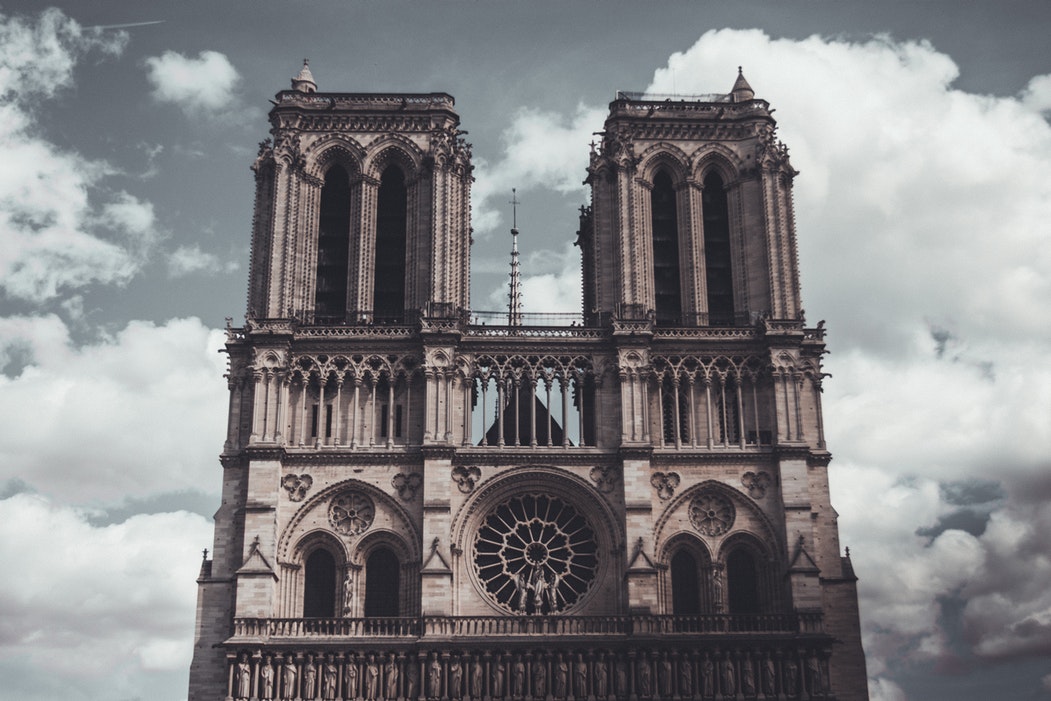