I see white + gold. My wife keeps going back and forth. Yesterday she saw white and gold, but when she woke up this morning she saw black + blue. Then she took an afternoon nap and awoke seeing white + gold again.

I do quite a bit of video + photo editing, graphic design, etc. Each of these processes requires close attention to colors and detail. This got me thinking: What color does my computer think the dress is? 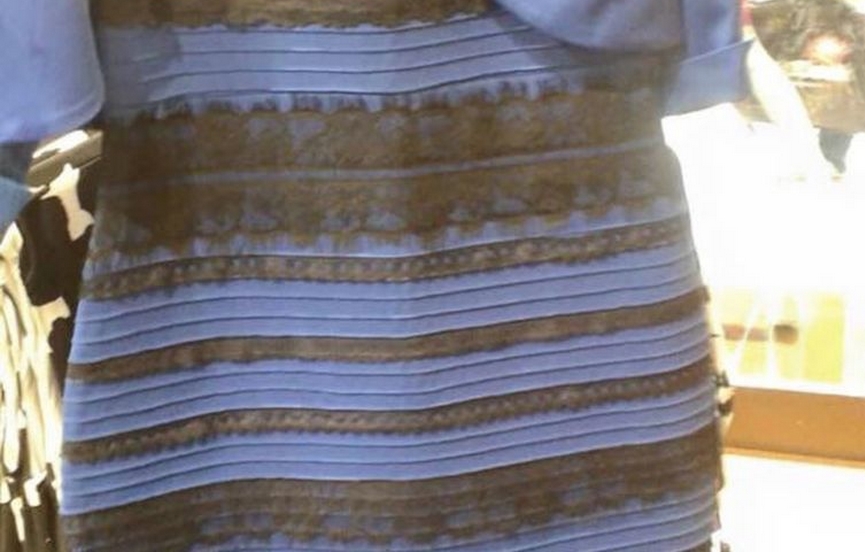 To reiterate, I only see [and have only been able to see] white + gold. I even edited the background out in one of my photo editing programs, replaced it with a solid white background, then with a solid black background, and still the dress has only ever looked white + gold to me. So I used the nifty Color Picker tool, which selects/tells you the specific color of an area of a photograph or image. But before I used this tool on the photo of the dress, I tried it on a famous optical illusion featured in a great Vox article about the dress. Vox stated:

The squares labeled “A” and “B” are the exact same shade of gray. But our eyes see them as different colors because we’re making assumptions about the light around the squares. We assume that square “B” is being bathed in shadow, so our brains tell us it must be a lighter shade of gray in reality. 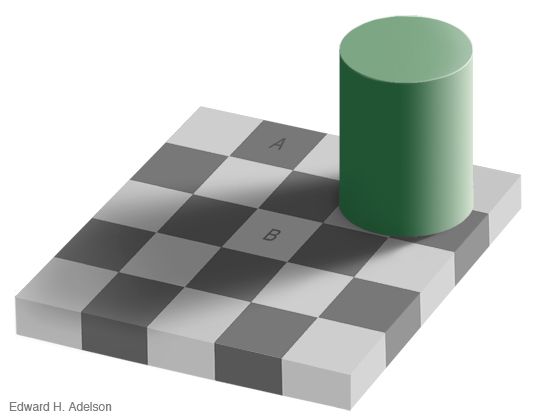 I was so angry that my brain was [supposedly] falling for this trick, so arrogantly certain that the squares were different colors, that the article was deliberately misleading me and trying to make me doubt my brain’s above-average ability to perceive reality, that I decided to use the Color Picker tool on both squares “A” and “B.” Sure enough, my computer recognized them as being the exact same color: #787878. And yet, even though I now know, objectively, that squares “A” and “B” are the exact same color, I still cannot see it when looking at the image. I know, intellectually, that it’s the truth, but it still doesn’t feel like the truth. It still doesn’t seem true.

Now that I’ve shown you how inept my brain is at perceiving objective reality, these are the colors that the computer recognized the dress as being: 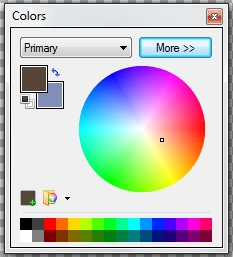 As you can see, in the photograph itself, the color debated as being gold or black actually has more of a brown/grey color to it, which seems to be a healthy blend of what different people are seeing. The color debated as being either white or blue actually has a light blue tint to it, which is a healthy blend of white and blue.

There are a lot of theories out there as to why different people’s brains perceive the same colors in different ways. I won’t expound upon them here. For all intents and purposes, the objective colors of the dress in the photograph [according to the RGB color model] are #574637 (a brown-ish/grey) and #808EBB (a light blue).

If the colors in the photograph are right in the middle of where folks are perceiving them to be, that is, if people seem to be perceiving a middle as an end, new questions arise: Do humans have a tendency to think in extremes? If so, why? And can it be prevented?

The color of the dress in the photograph has no bearing on the color of the actual dress, and yet, my social media feeds indicate that people are polarized by the question What color is this dress? But this isn’t surprising to me. We’re polarized by a lot of things. Was Eric Garner choked by the NYPD or not? Was Obama’s use of the pronoun “that” a reference to your “business” or to the “roads and bridges” that helped make that business possible (click here for reference).

There is an objective answer to all of these questions. Some of them are more knowable [and/or less arguable] than others. We know, for instance, that the actual dress is black and royal blue. The colors of the dress in the photograph, however, seems to be a matter of perception — based on biological, chemical, and psychological predispositions unique to each individual’s brain. It’s amazing, really! But this is precisely why I feel the need to acknowledge that the real question at the heart of What color is this dress? is and, for the sake of reasonable discourse in all other areas of our lives, should be: How does my brain work?

We have to be honest with ourselves and ask questions like: Is my assessment of the circumstances surrounding Eric Garner’s death in any way affected by a like/dislike of black people or by a trust/mistrust of local law enforcement? Without knowing his mind, can I really say with certainty to which noun Obama’s pronoun was referring? Or am I using my approval/disapproval of the man as my system of measurement? The photograph of the dress is a more innocuous but still very real example of how our brains work. And it’s so fascinating to me that two people could see the exact same thing and yet see totally different things!

What troubles me about much of the discourse on social media, though, is the absolute certainty with which people are declaring that the colors they see in the photograph are the true colors. I even saw one person on Facebook non-facetiously attempt to frame this viral sensation as a media conspiracy aimed at changing perceptions and changing the truth. “Don’t fall for it,” he warned. Where does that mentality come from, if not from a tendency to think in extremes?

What’s funny about the whole debate is that whether you see the dress in the photograph as gold + white or black + blue, you’re wrong. But, then again, you’re also right. Or maybe you’re neither.